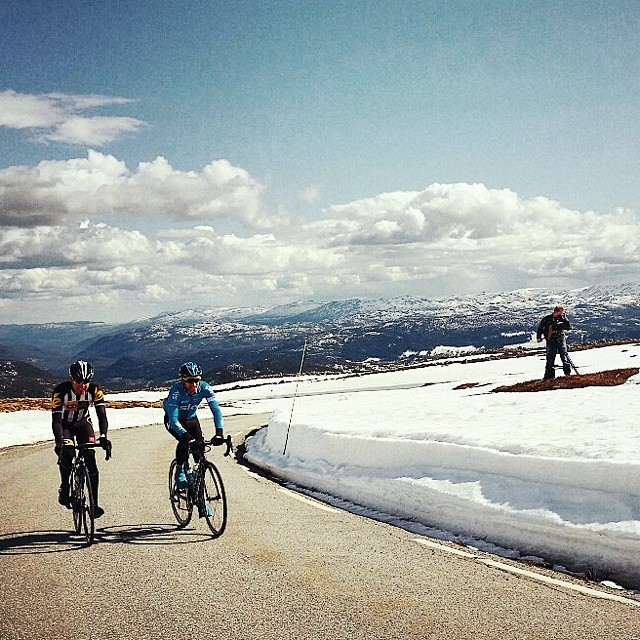 This brilliant picture is posted by Edvald Boasson Hagen on his profile on instagram (@edvaldbh). NorskSykling then added some words and repostet it on our own profile (@norsksykling). If you want to see more fantastic shots from Edvald Boasson Hagen – just follow the button below.

Edvald Boasson Hagen (@edvaldbh) and Lars Petter Nordhaug (@lpnordhaug) out for a recon before the race Tour of Norway in 2015.

In the race Jesper Hansen from Tinkoff Saxo showed impressive muscles up to Flistjønnskaret. With a lead of about half a minute over the top he won the stage ahead of Edvald Boasson Hagen and Ivan Sataromita. An impressive solo victory! Hansen was also rewarded with the yellow leader jersey and took with this his first professional victory.

Despite a powerful ride down from the summit Edvald was unable to obtain Hansen and finished second, 37 seconds behind.

Lars Petter Nordhaug also tried to break free several times, but finally came in with a larger group 1.30 minutes behind Hansen. Alexander Kristoff and Vegard Stake Laengen also was in this group.

The Tour of Norway is a road bicycle race held annually in Norway. It is considered as a successor to the stage race Ringerike GP, which is now a one day race. It was started in 2011. The race is ranked 2.HC on the UCI Europe Tour. More info here: tourofnorway.no